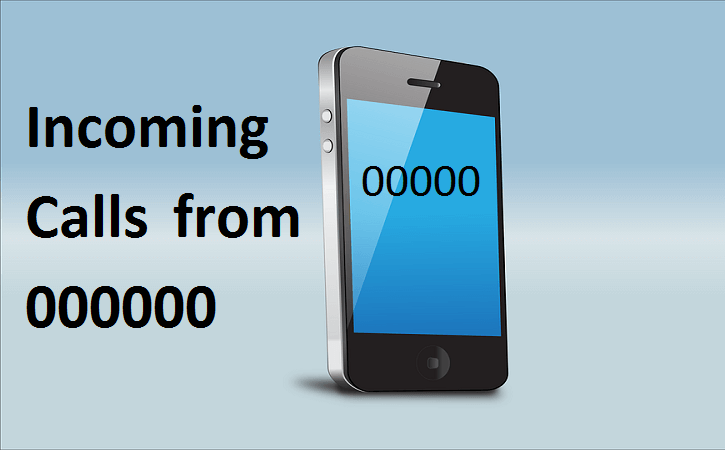 Earlier, when landlines were more prevalent and there was no caller ID yet on the instruments. This often caused worry when you received a blank call or a prank call. Later on, as caller IDs became more common and people started relying on mobile phones it became easier to identify the caller and decide whether you want to answer their calls or not.

However, there are still instances when you may receive a call from a strange number. By strange, we don’t mean an unrecognized number but receiving a call from an irrelevant number, such as call from 00000. Rising numbers of mobile phone users are reportedly getting a incoming call from 00000 number, which is truly strange in itself because this number is not a valid phone number of any sort.

So, what does a phone number with all zeros mean? Is it a malicious call? Is there a risk of answering calls from 00000, and what to do when your caller ID shows all zeros?

If you get a call, or missed call from 00000, then it could be possible that:

The reason behind this could be that the caller is calling from a private number, or the caller does not wish to disclose their identities for malicious reasons.

A VOIP call can be made without incurring the conventional charges of international calling from your phone company.

Often, ID hiding apps will display the user’s number as simply a string of 10 zeros in sequence. This way, the identity of the caller is discreet and cannot be discovered easily.Also, Read Mobile App trends

What does a phone number with all zeros mean?

There has been significant speculation as to the origin of the strange phone number and even its purpose. Although there is no clear explanation for what does a phone number with all zeros mean, there are several reasons that are suspected behind this, including:

Many times, people report receiving call from 00000 and answering them only to discover it is a telemarketer trying to hide their actual phone number. This is mainly done using a VOIP connection. Unfortunately, this has become a common practice among telemarketers, especially those involved in international processes.

Many users also report finding the missed call from 00000 to be fake or from unknown persons.

Often, international callers who wish to keep their phone numbers personal will also use a secured connection which scrambles their actual phone number into a random sequence.

Is it safe to answer a call where caller ID shows all zeros?

Keep in mind, that a phone number in itself can never be dangerous. The risk comes when you pick a call from an impersonator or spammer and divulge your details voluntarily. So, if you get a call from 0000 the next time, don’t worry. Simply answer the call if you have the time or let it go to voice-mail.